The development of a new Aldi supermarket called for alterations and the installation of a new pedestrian crossing on the Southampton Road in Portsmouth. Subcontracted to the developer as a specialist Section 278 Highways contractor we undertook all of the highways work outside the site. Working on the busy A27 we were required to widen the existing carriageway and construct a new entrance bell mouth in to the site. Traffic management was installed to create limited working space on each side of the carriageway with pedestrians diverted on to alternative paths. Work was carried out by one of our most experienced NRSWA accredited teams during normal weekday working hours. 8 Tonne 360° Excavators were used to load dumpers tipping spoil in a stockpile ready to dispose off site. The work was hampered by many existing service ducts and buried cables which were either lowered or diverted as our work progressed. A subcontractor was appointed to install the new traffic signals using the ducting we installed during our works. On completion, our team surfaced both footpaths and carriageways which was followed by road line marking. 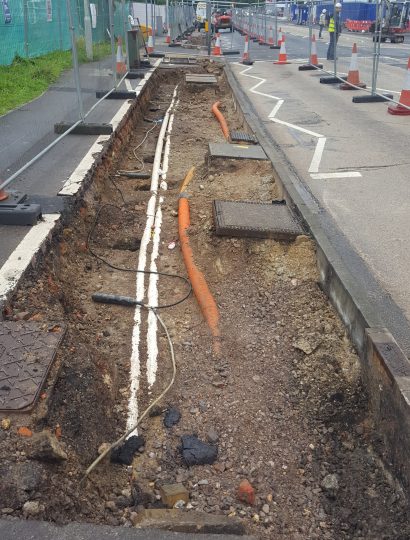